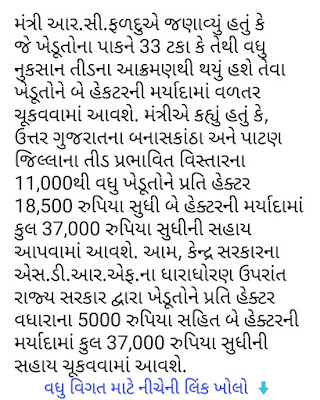 Faldu also said that the amount of assistance to be paid to the farmers would be deposited directly from the DBT into the farmers' account. In addition, the remaining farmers will be assisted by conducting surveys as per their requirement. The Agriculture Minister said that this state government, which is constantly worried about the farmers, has announced a family support package of Rs. 3795 crore on loss of farmers' crops due to poor monsoon post-Diwali. Now, the government is steadying their grip on the time of crisis of the world by giving a package of Rs 31.45 crore to the farmers against the crops damaged by the locust invasion. Faldu said that efforts were started to control the situation immediately after the locust attack in the border area of ​​Gujarat. He started spraying heavy-dose drugs with the help of 18 government locust control teams. In the area where a large locust was widely needed to control the locust swarm, farmers and their families have managed to prevent this potential huge loss even after the public's cooperation to control the locust by knocking the vessel and smoking. Apart from this, locomotives of heavy doses were also overcome by obtaining 104 tractors used for spraying medicines from local pomegranate farmers.

The agriculture minister further said that the agriculture department survey showed that crops like cumin, rhizo, wheat and castor were more damaged. The entire situation was reported to the Chief Minister and the Deputy Chief Minister after a detailed survey of how many farmers were affected by locust. As a result, the state government has decided to make this farmer a favorable decision.