11 days of penance from sunrise to sunset near Bhachau in Kutch.

The saint sits in the middle and performs penance by lighting a round chana holi on the ground. 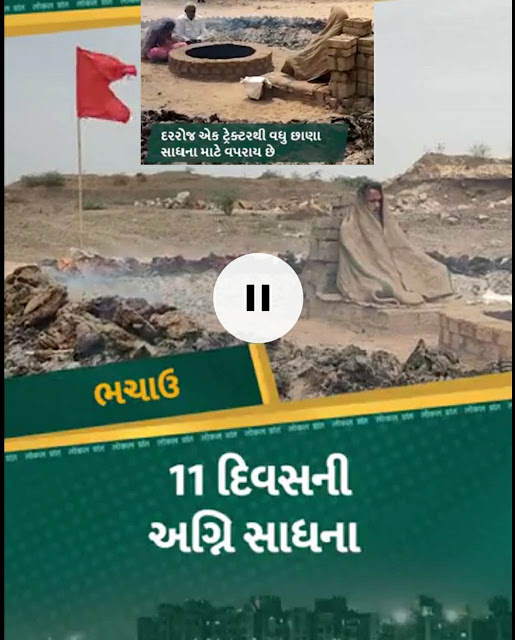 When the whole country and the world becomes free from Korona, Agni Sadhana is being performed in the scorching heat by a saint near Bhachau in East Kutch.  Saint Pankajmuni, who arrived in Kutch from Kalaghudi province of Khandwa district of Madhya Pradesh, is doing intense penance for the sake of public welfare and world peace.

Saints do not take a Gurudaxina.

Shankar Puna Chhanga, a former sarpanch of Karmaria village, a devotee of the ascetic saint, said in a face-to-face interview that no special announcement has been made about the fire at the Mahavir Hanumanji temple near Bhachau.  However, if any devotees come for darshan, they are strictly following the guidelines of the government.  The saint, who is an MP, visits Kutch once a year during his visit to India.
It is also a privilege to listen to satsang discourses conducted through his knowledge.  His servants are all over the country.  Dakshina himself does not take a single rupee.  The liberation sacrifice of Koro has been initiated by such a rare saint, which will be very important from a religious point of view.
વિડિઓ જોવા CLICK HERE

The penance of this saint is to last for 11 days.

Jivabhai Rabari, the administrator and servant of the temple, is handling the entire responsibility of this ritual.  He said that more than one tractor of manure is used every day during this sadhana.  The fire burns from early morning till evening.  For this, Bapu's eyes are constantly watching, nowhere is the fire extinguished.
Share on Facebook
Share on Twitter
Share on Google+
Share on LinkedIn