Rani Ki Vaav [the step well] is an approved site on the world heritage. It was declared by the
UNESCO at the world heritage committee. UNESCO has recognized this masterpiece as an
exceptional example of water management system. It is a wonderful sample of technological
development for utilizing ground water resources in a single structure. It is also a unique illustration of
breaking large spaces into smaller volumes with artistic presentation. Rani Ki V aav has a great appeal
to every observer.
Queen Udayamati, the widow of King
Bhimdev-I constructed this Vaav between
1022 and 1063 A.D. Rani IG Vaav has
become one of the most popular places to
visit in Gujarat. King Bhimdev-I belonged
to the Solanki dynasty of Anhilwad Patan.
After his death Udayamati took up the
project for solving the problem of water
scarcity faced by the people of Patan.
Unfortunately the queen also died before
the completion of this structure. In the world of architecture, her beautiful idea has received immense
appreciation.
Queen's stepwell or Rani ki Vaav is a seven storeyed structure. This East facing stepwell is 64 meters
long, 20 meters wide and 27 meters deep. Each sculpture, passage, pillar and pavilion in this
magnificent structure has enchanting carvings. On its side walls there are around 800 sculptures. 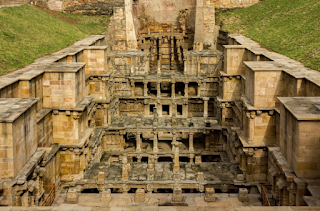 V. 1 Find the sentences having a group of words almost similar in meaning in the text.1. Your great work for the society will get very large praise.2. The Taj Mahal is a decorative example of a great monument.3. Amit's name was proposed for the best student award by the committee.4. You will find some distinctive idols of goddesses in the temple.5. Akbar was one of the kings from the Moghul king's family.6. Shahjahan built the Taj Mahal in 1632.7. Each painting in the Ajanta caves has an appealing effect on the visitors.

V. 2 Complete the paragraph using the words from the bracket with the help of your partner.

[ heritage, sculpture, blend, architectural, ornamental, construction, design, enchanting ]
The world site of Fatehpur Sikri is located about 39 km fromAgra in U.P. The
city is about three mile long and one mile wide. Built with red Sikri stone, the city is of
Islamic and Hindu style . The sand stone throughout the city has exquiste and
interlaced decorative . The planning and of the walled city took 15 years. It is
an place to visit.
There are nearly 400 big sculptures of different gods and goddesses in the V aav at present. These
numbers would have been many more in the past in its original structure. Each storey has a narrow
corridor for the visitors to appreciate beauty of sculptures and carvings engraved on the walls. Even the
pillars of the Vaav are not exception to it. They display splendid artistic marvel on the stone.
In fact, the V aav is solely dedicated to Vishnu. One can find Vishnu in different shapes and postures.
After Vishnu, next important statue is ofParvati. Nearly 15 galleries have the sculptures ofParvati. 12
statues of goddess Gauri together at the same place are rarely found anywhere. The Sun temple of
Modherahas it. This Vaav has also all the twelve statues ofGauri namely- Uma, Parvati, Gauri, Lalita,
Shriya, Krushna, Maheshwari, Rambha, Savitri, Trisanda, Total and Tripura. Besides, there are many
statues of gods and goddesses such as Ganesha, Agni, Vaayu, Surya, Bhairav, Chamunda, Brahma,
Indra, Indrani, V aishnavi, V arabi, Mahalakshmi, Kuber, etc.

There are also some of the rare sculptures of gods. Here one can find the statue ofLord Buddha with
four hands, the statue ofRama with sword and shield, the statue of Sun in form ofTapasvi, the statue of
Shiva with beads in his hand, the statue ofParshurama with soft and gentle expression rather having
hard and stem look, etc. Some of the sculptures display contemporary life-style, folk tales, animal and
human instinct, etc. They reveal artistic vision and unique imagination of the sculptors. There are
nearly 300 statues of Apsaras. The sculptors presented a vast range of emotions and feelings on the
facesoftheApsaras. Theydisplayvarietyofdifferentmoodsandsituations.
Most of them present Vishnu in his ten different avatars. The most attractive sculptures are those of
V arah, V aman, Narsinha, Ram, Kalki and Mahishasunnardini. The apsaras with 16 different make up
styles add to the grace of this unmatched structure. The stepwell also focuses on the holiness of water
and its great significance in Indian culture.
The V aav is the most developed, elaborate and ornamented example of submerged architecture. It
sings the glory of development of stepwells in India. This V aav is large and complex type of stepwell. It
has ornamented panels of sculptures. It lay buried under the mud due to floods first, and then
vanishing of the river Saraswati. It was hidden under the layers of silt for almost seven centuries. The
Archeological Survey oflndia(ASI) took a great care to preserve this structure.
In February 2013 ASI nominated this Vaav for the World Heritage site. With the excellent
teamwork by the ASI and State GovemmentofGujarat, it got recognition by the UNESCO.
Share on Facebook
Share on Twitter
Share on Google+
Share on LinkedIn