THE NIGHT TRAIN AT DEOLI

THE NIGHT TRAIN AT DEOLI

When I was at college, I regularly spent my summer vacation in Dehra, at my grandmother's place. I

would leave the plains early in May and return late in July. Deoli was a small station about 50 kms from Dehra. It was on the border of the heavy jungle of the Indian Terai. 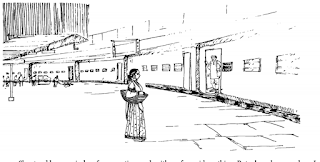 I decided that one day I would get off the train at Deoli and spend the day there. I was eighteen, visiting my grandmother and the night train stopped at Deoli. A girl came down the platform selling baskets. It was a cold morning and the girl had a shawl across her shoulder. Her feet were bare and her clothes were old. She was a young girl, walking gracefully towards me. When she came to my window, she stopped. She saw that I was looking at her intently, but at first she pretended not to notice. She had a pale skin, shiny black hair, and dark eyes. And then those eyes, searching and lively, met mine. She stood by my window for some time and neither of us said anything. But when she moved on, I, don't know why, left my seat and rushed to the carriage door. She noticed me at the door, and stood waiting on the platform. I walked across to the tea stall. A kettle was boiling on a small fire. The girl followed me behind the stall. "Do you want to buy a basket? She asked. "They are very strong, made of the finest cane." "No," I said, "I don'twanta basket." We stood looking at each other for a very long time and then she said, ''Are you sure you don't want a basket?'' ''Give me one,'' I said, and I took the one on top and gave her a rupee. I wished to touch her fingers, but could not.

The guard blew his whistle; she said, something, but it was lost in the clanging of the bell and the hissing of the engine. I had to run back to my compartment. I watched her as the platform slipped away. She was alone on the platform and did not move, but she was looking at me and smiling. I watched her until the signal box came in the way, and then the jungle hid the station. I could still see her standing there alone. I sat up awake for the rest of the journey. I could not forget the girl's face and her dark, bright eyes.

But when I reached Dehra, the incident got blurred and distant; for there were other things on my mind. It was only when I was making the return journey two months later, that! remembered the girl. I was looking out for her as the train drew into the station and I felt an unexpected thrill. I saw her

walking up the platform. I ran to the door and waved at her. When she saw me, she smiled. She was pleased that I remembered her. I was pleased that she remembered me. She did not start selling baskets, but came straight to the tea stall. Her dark eyes were suddenly filled with light. We said nothing for some time but we spoke without words. I felt the impulse to put her on the train there and then, and take her away with me. I could not bear the thought of watching her vanish into the darkness of Deoli station. I took the baskets from her hand and put them on the ground. She put out her hand to take a basket, but I caught her hand and held it. ''I have to go to Delhi,'' I said. She nodded.' 'I do not have to go anywhere.'' The guard blew his whistle and I hated the guard for doing that. "I will come again," I said. "Will you be here?" She nodded.' 'I do not have to go anywhere.'' She nodded again. The bell clanged and the train slid forward. I had to pull my hand away from the girl and ran for the moving train.

This time I did not forget her. She was with me for the rest of the journey, and for long after. All that year she was a bright, living thing. And when the college term ended I packed in haste and left for Dehra earlier than usual. I was nervous and anxious as the train entered Deoli. I was wondering what I should say to the girl, and what I should do. I was determined that I wouldn't stand helplessly before her. The train came to Deoli, and I looked up and down the platform, but I could not see the girl anywhere.

I opened the door and stepped off the foot board. I was deeply disappointed. I felt I had to do something, and so I ran up to the station master and said, 'Do you know the girl who used to sell baskets here? "No I don't", said the station-master. The train was moving out of the station, and I had to run up the platform and jump for the door of my compartment. As Deoli platform vanished, I decided that one day I would have to break journey there. I would spend a day in the town, make enquiries, and find the girl who had stolen my heart with nothing but a look from her dark, impatient eyes. In the last few years I have passed through Deoli many times. I always look out of the window to see the same unchanged face smiling to me. But I will never break journey there. I prefer to keep hoping and dreaming, and looking out of the window for the girl with the baskets waiting for me. I never break my journey at Deoli, but I pass through as often as I can.

0 Response to "THE NIGHT TRAIN AT DEOLI"