gujarat thuosands of post to be filled in primary school, high school and colleges in gujarat after

The Department of Education has made a significant decision to fill the vacancies of various cadres including primary education teachers in the state, secondary and higher secondary education assistants and teaching assistants of higher education. Under this decision, recruitment of these places will be initiated immediately after the budget session. 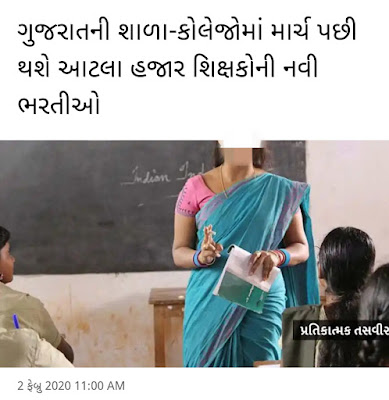 The official said that more than 3000 education assistants will be recruited for the first time as more vacancies are left in primary education. The retirement season is now in the government schools. With over 2500 teachers retiring every year, the number of teachers is decreasing. Given the schools and the department, the state currently needs more than 20,000 education assistants who…

As the number increases by 20% of teachers retiring every year, the idea of ​​recruiting 2000 assistant professors has been started.

He said that the recruitment of education assistants in the primary schools would be done by the Director of Primary Education, the recruitment of education assistants and the recruitment of the teaching assistants would be done by the Higher Education Commissioner. The worst condition in Gujarat's education is that of primary education. The number of teachers is declining compared to the number of children in schools, while the shortage of principals and professors at the secondary level is becoming a headache for the government.
Gujarat primary school, high school and colleges in Teacher job Releted News Report
IMPORTANT LINK  FOR TEACHER JOB NEWS
READ OFFICIALLY News in khabarchhe.com
NEWS REPORT CLICK HERE
Share on Facebook
Share on Twitter
Share on Google+
Share on LinkedIn
Newer Post Older Post Home