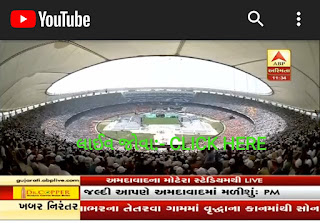 The program is looking at the world with the country. The youth of Surat have prepared a special welcome song for the leaders of the two countries. The beginning of the song
' Sher ne Sher Ko Bulaya Hai...' 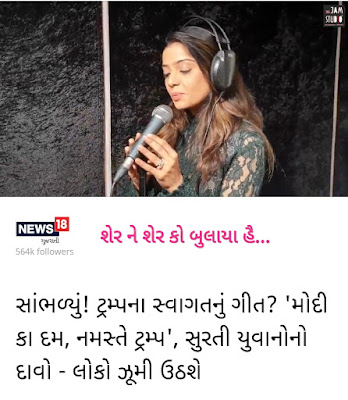 The system is busy preparing for Donald Trump's road show in Ahmedabad. Senior officials are monitoring road show preparations. One lakh people are likely to be present on the entire route during the 22 km long roadshow. So today a grand rehearsal of the road show is being chaired by SPG's IGP Rajiv Ranjan Bhagat. This grand rehearsal includes a fleet of over 100 vehicles. A team from GP, DIG, DGP, SPG and NSG have also joined the rehearsal. Other agencies, including Crime Branch, were also involved in the rehearsal. Security review has been conducted by inspecting security personnel on the roadshow route from the airport. The route also includes the Gandhi Ashram.
Municipal Commissioner Canal tweeted that Modi and Trump's road show will be up to 22 kilometers. US President Donald Trump will visit Sabarmati Ashram tomorrow during a visit to Ahmedabad.

Several NRIs have arrived at the 'Namaste Trump' program to be held at the Motorra Stadium. Speaking to which NRI News18 spoke to Gujarati, the program would have a broad impact on the US elections. Originally Gujarati and currently living in New Jersey and Washington, Jaybhai and Rahulbhai have arrived at Ahmedabad's Motorra Stadium. They also looked at the Howdy Modi program. And now he is also attending the Namaste Trump program.
Share on Facebook
Share on Twitter
Share on Google+
Share on LinkedIn
Newer Post Older Post Home