Hello friends WELCOME !
I Hope you are healthy. Lockdown time has been extended 3 May 2020 by the Government. During this time, fun activities and best study materials will be provided on this studymaterials blog. In addition to the government information including new circularsissued by the State Government of Gujarat and Government of India.

Consideration of the government to cut the tide.

The state of Gujarat, which is claiming stability on the economic front, has collapsed in a three-week lockdown, and with the announcement of a further 19-day lockout, the economic crisis is about to crumble. Have taken serious consideration of putting enough on now. Mostly the current weekend fix The decision will be taken in this regard, is being relayed the word.

The imposition of a partial or complete ban on government recruitment will be the most stringent and seriously affecting the general public, as unemployment is at the peak of 45 years, and candidates with academic qualifications for government jobs are kicking off. It was decided to discontinue new government recruitment due to the immediate economic crisis. In the house, police constables and education departments were allowed only in the recruitment of female teachers. Government recruitment was partly restricted till 2006. 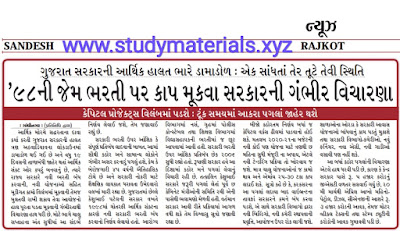 The second toughest decision could be to defer all capital works. That means no new plans for the budget of 3-4 will be approved for three to six months, so the new tendering process will be lost. Only ongoing schemes will work and one of them can cut 3-5%. Sources say that after implementing these measures, the vibrant Taifan government will have to shut down, as well as the construction of new buildings, new offices by the government departments, the planning will be stopped, the construction of school rooms or government housing schemes will be halted and government departments. -Offices, new refineries, new ACs, new trains.