gujarat primary school kholva babat latest news
CRC co-ordinator is recruited in primary schools of Gujarat. This recruitment is done through Sarva Shiksha Abhiyan. The first ad is released. Then a written exam is held. The exam is held in Ahmedabad or Gandhinagar. The result is then given. After this result, the District Wise CRC Recruitment Merit is ready. The CRC is appointed on the basis of this merit. The CRC has teachers and education assistants from that district. They can take the exam.

The Gujarat government has decided to open all schools across the state from September 1. All standard schools will be closed till August 15. After August 15, in the first phase, colleges and standard 10 and standard 12 schools will be reopened. Then from September 1, all the schools of standard 1 to 9 and class 11 will reopen. State Education Minister Bhupendra Singh Chudasama said this while answering a question about opening a school. Bhupendrasinh Chudasama also gave important information regarding school fees 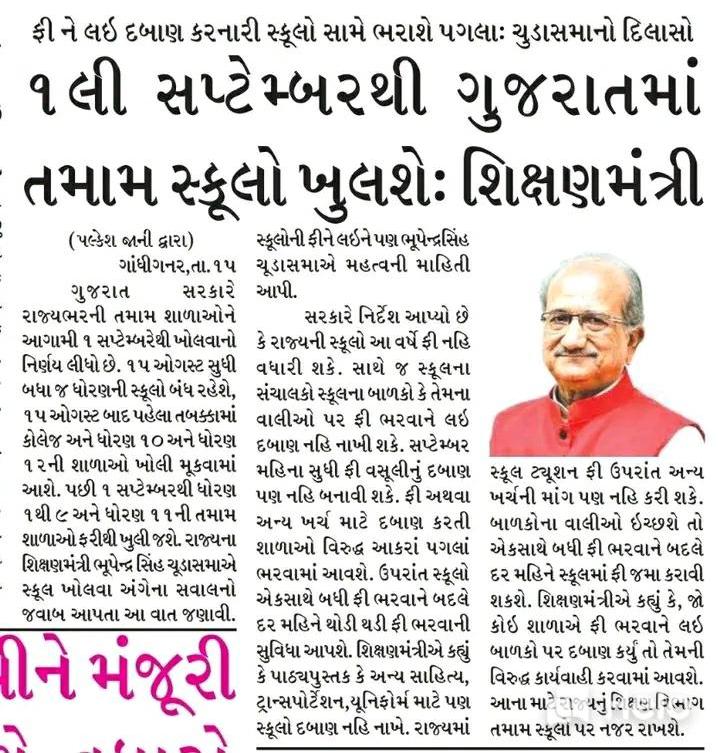 It may not even create the pressure to collect fees until September. Recommended Videos Powered by Firework Actress Amala Paul is all about "self-love" How to toilet train my puppy? Blue strawberries. Join Community Wing suit rodeo Sindre E Celebrity Doppelgangers See more School tuition fees in the state can not demand other expenses. If the parents of the children want, they can deposit the fees in the school every month instead of paying all the fees together. The education minister said action would be taken against any school for forcing children to pay fees. For this, the state education department will keep an eye on all the schools.