Reconsider decision to close 179 STD 6 and 7 schools in Kutch: Rajuat.

Kutch-Bhuj District Primary School News : The state education department has decided to close higher primary education classes like Std 6 and 7 with less than 20 students and merge them with another school with in 3 km.  According to the resolution, 179 schools will be closed in Kutch.
The process, which started on November 3, will end on November 30.  Then, Kutch MP Vinod Chavda sent a letter to Education Minister Bhupendrasinh Chudasma in this regard and made a telephonic presentation.  The decision is said to be reconsidered.
Based on a representation received from the Kutch District Education Federation, Chavda told the Education Minister that the geographically largest Kutch district of the country is inhabited by scattered villages, barns and wadi areas for animal husbandry and agriculture. 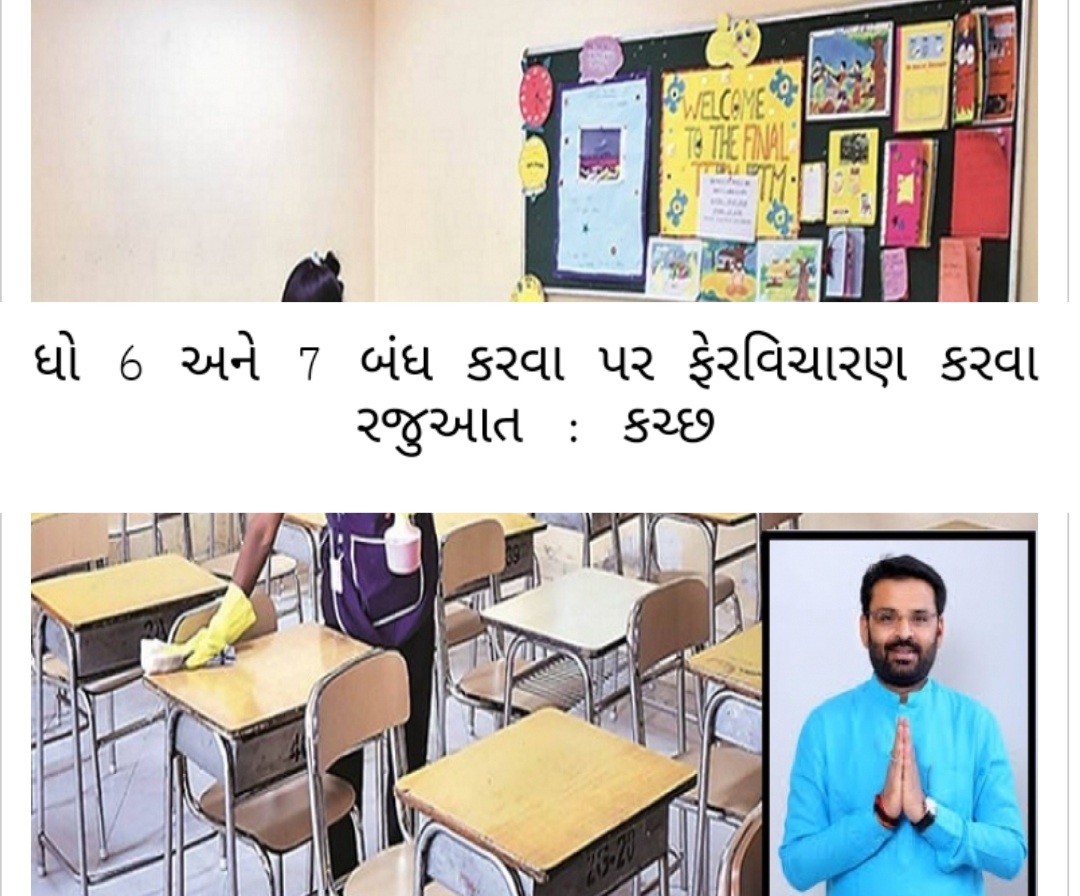 Younger children will be doomed if the sixth and seventh grades are moved elsewhere.  Their siblings also go to school with the help and support of the children studying in standard six to seven.  Their education may be adversely affected.  In particular, there is a fear that younger daughters will be deprived of education and the drop out ratio of students will increase.  Prime Minister Narendra Modi has called for high quality toilets, cleanliness and education in every school.
While the state government is also committed to ensure that no child is deprived of school education, the primary education department also reconsidered the matter and appealed to the MPs to think positively in the interest of education. Bhupendrasinh, who was in Abadsa-Lakhpat for a month and a half, forgot everything?  On the one hand, Home Minister Amit Shah celebrated the development of the border area in Dhordo and claimed that the central government was committed to the development of the border areas.  On the other hand, the same BJP state government is committed to closing upper primary education classes on the pretext of fewer students.
Education Minister Bhupendrasinh Chudasama, who had been camping in Kutch for a month and a half after the Abdasa elections, laid the foundations of Abdasa and Lakhpat.  Have experienced the quality of the hinterland.  However, he did not listen to the earlier representations made by Kutch education unions in this regard.  It seems that this minister was only interested in winning the election.  However, it remains to be seen whether he will count on the representation made by an MP from his own party.
@ Important Link @
Read This News Ni Gujarati ? - CLICK HERE

How many classes of which taluka are closed?  ?

The submission of the rest of the MPs is self-evident that the border and special Kutch cannot be chased away with a single stick along with other districts of Gujarat.  Kutch is a special case.
The talukas in which standard six-seven classes are to be closed include 45 rapar, 31 Bhachau, 28 Bhuj, 20 Mandvi, 15 Lakhpat-Abadsa 15-15 and Anjar-Nakhtrana 7-7 classes.  Education is a child's basic right.
Thanks For Visiting our Educational News and Study Website www.studymaterials.xyz
Share on Facebook
Share on Twitter
Share on Google+
Share on LinkedIn